Since Google has the biggest market share in Europe, we tend to only watch their developments. Don’t forget we have other search engines too: how are Blekko, Yandex, Baidu, Sogou and other “foreign” engines developing? First have a look at the current (average of 2013) market shares of search engines in Europe and World Wide, source Statcounter: 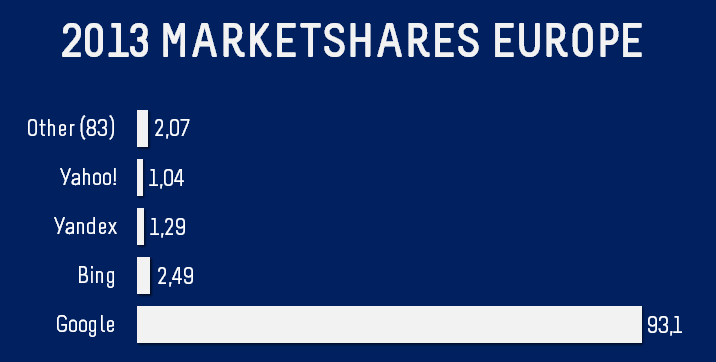 Looking at these graphs, it definitely is not a strange question to ask: what other search engines are there? In the search engine landscape, there are just 5 countries / regions where Google is not market leader in terms of number of searches per month. If you are going to look at the number of page views, there are some more countries in which there are bigger players operating but as a SEO I’m more interested in the usage statistics.

The first market which is interesting to look at, is the Chinese market. For one simple reason I will start with China: their e-commerce market is rapidly growing. The annual growth rate of this country is completely crushing other countries numbers. Annual sales are exploding, so being a internationally focused e-commerce website, I would definitely have a look to the Chinese market and try to get a piece of the growing cake. It is a growing cake because internet penetration, especially broadband, is still low (30%).

China is known for censorship, especially Internet censorship. Most of you will have read about The Great Firewall. Since 200 every website that uses Chinese hosting, needs to have a ICP (Internet Content Provider) license which is a permit by the Chinese Government. This is only issued to Chinese companies so if you want to employ local hosting and domain name, partner with a local company. Internet service providers (ISPs) have to block websites that don’t have a valid license. Besides that, search engines and ISPs have to block websites that contain specific keywords or content. Please have a look at the Wikipedia page to get an idea of what content is blocked. As you can see in the illustration below, Google lost some of her small market share during the last two years and Baidu, Sogou and Soso all have an increased share:

The first thing every curious SEO will do, is reading a search engine’s guidelines. Luckily Google is doing a great job with translating simplified Chinese into English, so have a try: Official guidelines Baidu Search Engine! One thing every SEO will like is the following quote which can be found in one of the first paragraphs of the guidelines.

“…No need to lie, since 1997 when SEO appeared for the first time, it has been kind of the enemy of search engines…”

Baidu’s robot is really struggling with getting enough URLs crawled. In fall 2012 Baidu had around 800 million pages in their public index, Google had around 48 billion. I would define that as a major issue. There is another difference between the European and American markets: the percentage of mobile visitors. In Asia it is around 24,48%, Europe has 8,75% and North America 13,33. Statcounter gives you a nice interface to get some interesting detailed information, although their data is not the most reliable; it gives you insights in trends.

Looking at your website, you should really take care of loading speeds and optimizing on page elements. Some tests have showed the Baidu robot is only downloading the first 100 kilobyte of a webpage so make sure your content is the first element the robot can find in your HTML. Last July they actually changed their robot to ignore 404 after a certain period so no energy is wasted on non existing URLs.

How do their SERPs look?

Once you have your Chinese website optimized, you want to start ranking in Baidu. Just try a commercial query: Hotel London and you will see a lot of results supplemented with a small V button. If you click on that you will get a sort of company profile which acts as a certificate for that company. You will find a sort of vCard with a rating (1 to 5 stars) and some company details: Company profile Booking.com BV so you can find out if an advertiser is trusted. Did you check how many advertisements are present on that search engine result page? No organic results above the fold, so Google is quite nice for us SEO’s compared to Baidu 🙂

Baidu is dealing with spam in a way Google does. Some of the updates they launched recently are:
– Money Plant: this update can be compared to the Penguin update and is targeted on link spam, especially link trading systems and networks.
– Money Plant 2.0: This update is targeting article directories and websites that offer paid postings.
– Pomegrate: the purpose of this update is to tackle websites that have an excessive number of ads present. Google presented this update as The Top Heavy Update.

One problem they don’t have, and Google does have, is the direct access to an information database. Baidu owns Baike, the equivalent of Wikipedia. It is even bigger, because they also allow information about recipes, product details and a dictionary for example. This comes in really handy if you want to build something like a Knowledge Graph! At the moment, Baike contains more than 5.3 million articles, Wikipedia only has around 4,3 million at this moment.

How about social data? Like Google, they started a collaboration with the Chinese version of Twitter: Weibo to make use of the real time data available through their network. But this doesn’t give enough data, so they launched their own sharebar system so they can easily check which pages are shared the most. How about privacy? No problem, since the Chinese government is already happy with the help of Baidu blocking certain websites. I have not seen actual data, but stories go around that websites that installed the sharebar, got better organic rankings.

A little shake up

The market shares that I showed above, are until Q1 of 2013. After that, there were some major acquisitions and launches in the market. Alibaba, the biggest e-commerce player (“In 2012, two of Alibaba’s portals together handled 1.1 trillion yuan ($170 billion) in sales, more than competitors eBay and Amazon combined”). They started working together with 360 to develop and update their search engine (360.cn & so.com). Besides that, they invested money in Sina Weibo, the social platform which provides Baidu with social data. This caused quite some disturbance in the market and market shares moved around. In June, the market looked like below. One striking element are the Google Ads in their results. 360 didn’t have time to develop their own advertising system, so decided to add Google Ads to generate revenue!

360 is really building a decent brand awareness and has a lot of ways to get useful data insights: they have their own browser (360 Safe Browser) and their own telephone, the Battleship Phone.

Another market that is a real competitor of Google is Russia. Since 1997, Yandex is a daring competitor of Google in countries like Russia, Ukraine and Kazakhstan. Since 2010 Yandex is also having an English only search engine which can be found at Yandex.com and is a lot different in terms of looks and categories of data available. At this moment Yandex has a market share around 62% in Russia and Google only has 26%.

As a former physics and mathematics student, I am a great fan of one of their biggest achievements: the development of MatrixNet in 2009. To keep it simple, it is a system which is capable of machine learning or artificial intelligence. This allows Yandex to easily customize specific queries within a certain niche without affecting query results in another niche. I would like to see what happens if MOZ conducts a ranking factor study for Yandex or Searchmetrics doing a correlation study on social network influence!

Like Google and Bing, Yandex has a decent Webmastertools section, which can be found at http://webmaster.yandex.ru/”>http://webmaster.yandex.ru/. You can link your Facebook account, so creating a account is not the most difficult part. Business can actually add an extra line of details to their SERP snippets. Too bad it is only available in Russian, but it is never too late to learn another language. (For the geek readers, try some of the 404 pages of Yandex :))

One of the launches which got worldwide attention was the introduction of Yandex Island last May. This update will go live at the end of this year for all Yandex.ru and is already live for the Turkish version of Yandex. With this addition, you can book flights, buy cinema tickets and make an appointment with your GP! Wait. Make an appointment with your family doctor? I’m really curious to see whether this will work and if people actually start using it. The general trend is that Yandex is increasing the interaction within the search engine result pages instead of sending traffic to other domains.

Looking at the market shares of the U.S. market, we don’t see any new players. But there are two search engines being developed that gained some media attention during the past year. One of them is Blekko, which differentiates from Google by claiming their search result pages are free of spam and viruses. Another big difference with Google is that they clearly categorize certain types of content within the SERPs, which is useful if you are looking for something specific. Another upcoming company is DuckDuckGo which is using privacy as their main unique selling point. They gather data and use algorithms from over 50 external sources, like Wikipedia, WolframAlpa and Yandex and show this for the appropriate queries. With all the fuss around the NSA and Prism, you would expect a major growth for the number of searches in DuckDuckGo, but the influence was rather small. The total number of searches did increase rapidly from 60 to 90 million per month, but compared to Google with 13 billion, they are still “a nobody”.

Other markets which have proved being real competitors to Google, in terms of number of searches or page views, are Japan, South Korea (Naver) and the Czech Republic (Seznam). In Japan, the most visited website is produced by Yahoo! The Japanese Yahoo! is a separate entity from the US based Yahoo! company. Since it also serves as a content portal, they are a competitor of Google in terms of traffic and monthly page views.

In the Czech Republic Google had quite some difficulty to get a #1 ranking in terms of market share, but since 2011 they have more than 50% of the market. Google invested some marketing budget into TV Advertising and therefore gained local attention very quickly.

At the end it is all about localisation

At this moment, the Chinese and Russian markets are really growing fast and still have lots of potential for e-commerce. If you want to make a move in one of those markets, make sure you thoroughly investigate the local search market, for both advertising and organic systems. They do differ a lot from Google’s system, of which most people think they are familiar with. Work together with local specialists, not only because of the language. Culture is even more important. Speed is key for every aspect within optimizing websites and revenue, so build a decent fundament by using local hosting and local providers.

Since Google is only tracking 40 search engines by default, a lot of organic traffic is ending up as referral traffic. Especially if you are dealing with international SEO campaigns, it is important to have data available from country specific search engines. As a worldwide e-commerce website you really want to be able to filter your data per country specific engine because there are a lot of differences between them. That will also mean that the value of that traffic will be unique. Enough reasons to configure your Google Analytics tracking code in the right way. I wrote a separate article about this issue some days ago: Adding non-standard search engines to track with Google Analytics