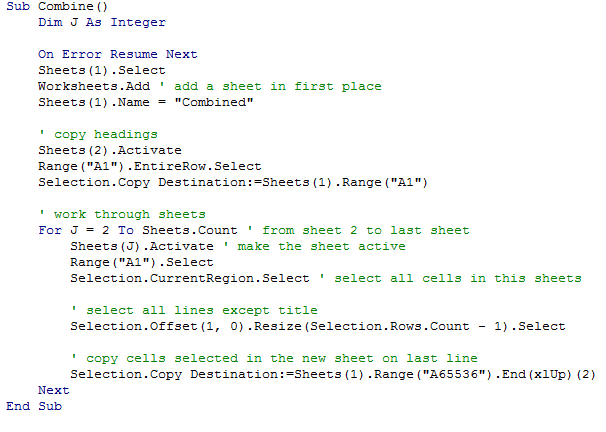 Sometimes you just need to merge hundreds of Excel files into one. For CSV files you can easily use the Command Prompt, for Excel you’ll need some VBA scripting. Working with many individual files can be time consuming so use below VBA scripts to merge individual XLS-files into one or combine multiple tabs into one sheet. Simply go to the Visual Basic Editor (Alt / Fn + F11), add a new module and run the script. An easy to understand tutorial can be found at The Excel VBA editor.
END_OF_DOCUMENT_TOKEN_TO_BE_REPLACED

Due to the fast-paced development of Google, where there has been more focus on the quality of content and websites by developing algorithmic filters like Panda, many websites have produced enormous amounts of textual content on their domains. A lot of websites are still targeting specific queries with unique pages instead of targeting a specific group of people. In the company of the latest updates of Google’s algorithms, where Panda is one of them, some problems start to occur. From a technical point of view, more content is not always positively influencing the organic results.

END_OF_DOCUMENT_TOKEN_TO_BE_REPLACED

So Twitter decided every tweet should be translated by default. Even if your Tweet is in English, they have it “translated” by Bing. I find it really annoying, and looking to all the buzz on Twitter, I’m not the only one. 🙂

There are several solutions, the most easy one you can use is an Adblocker and adding the following URL: https://twitter.com/i/translations/*

I prefer to use Adblock Plus which can be used for Firefox, Chrome, Android, Opera, Safari and Internet Explorer

For iOS users, you could try to block the same URL, via the following method iOS 7: How to Block Specific Websites and Group Shared Links On Safari

For people using Google Chrome, you can use the following plugin: ExtensionDisable Bing Translator on Twitter.

(Image credit; unknown since copied to thousands of websites without mentioning a source :))

Google proudly announced that they will show more detailed search query data in Google Webmaster Tools. Since the introduction of the query dashboard, Google has been showing rounded and summarized data points which where really useless, especially for low volume search query data. The only useful insights you could get out of it where the ratios between different types of queries, branded versus non-branded impressions for example. The SEO community actually reacted very positive but I think you always should keep in mind that Google is never doing something just to serve webmasters and SEOs. So did Google really improve the data quality and usability for analyzing purposes?

END_OF_DOCUMENT_TOKEN_TO_BE_REPLACED

From today on, I accept Bitcoins and other cryptocoins as payment for my SEO services. Since I really believe in the system behind cryptocoins, I will be accepting payments in the form of any available coin. Most online marketeers use open source software and so are the systems behind cryptocoins. The other important USP of using cryptocoins is the fact that no one, group or government can control the currency as it is.

Please contact me if you’re interested in any services regarding (international) SEO or Content Marketing. The reward (in number of coins) will be decided upfront and based on a hourly rate, so no risks if a project lasts multiple days or weeks if we agree upon a reasonable price.